As is known, the peel of fruits and raw vegetables, while having high contents of vitamins and mineral salts, contains on the surface many microbes, bacteria and other polluting substances originating from the fertilizers employed in the production, as well as from various birds, animals and insects, atmospheric agents, etc. Tossing fruits and vegetables into baskets or boxes may not leave visible bruises and damage, but decay will begin under the skin. Seemingly sturdy vegetables such as sweet potatoes are actually quite tender and will not store well if bruised. Endemic in nature so impossible to predict where it will occur next. The largest issue facing the fruit & vegetable industry is improving the shelf life of the produce.

eOxide LQ 85 is an excellent product for washing vegetables. It has the ability to kill spores, fungi and viruses at low concentrations. Chlorine dioxide is a proven product that can be used to solve many food related problems. It does not affect taste, odor or appearance. 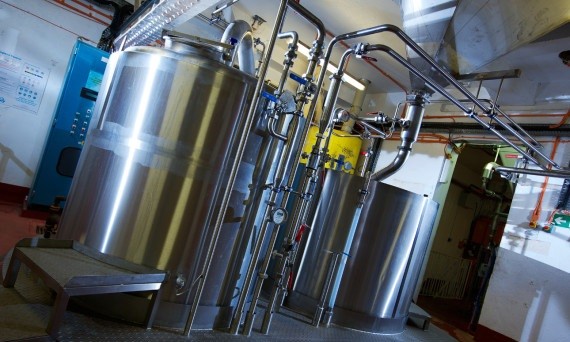 eOxide LQ 85 is a safe and effective sanitizer for use in a variety of brewing and packaging applications. Chlorine dioxide can be applied to water systems, processing equipment, and environmental surfaces to reduce or eliminate brewery spoilage organisms.

Pitching yeasts collected from brewery fermentations are never absolutely free of microbiological infection. In spite of whatever care and sanitary precautions are taken, some bacteria and wild yeast will contaminate the pitching yeast. The pitching yeast can contain healthy yeast cells and trub (dead yeast cells and organic residues) and may contain 5 to 15% dry solids (35). To minimize microbiological infection, chlorine dioxide, an alternative to distilled water or acid washing, is relatively new to the brewing industry and is gaining acceptance as a method for washing yeast. It kills via microbes by reacting chemically with sulfur-containing amino acids, the building blocks of protein which are used to form cell membranes.

Diseases and infections have always been a major concern to the poultry industry-especially in the hatchery. Microorganisms are everywhere! Some are relatively harmless while others are highly pathogenic. Some pose a lethal threat to one species of animal while remaining harmless to another species. Some organisms are easily destroyed while others are very difficult to eliminate. Treat all microorganisms as if they are a severe threat to the chick's livelihood.

Freshly slaughtered poultry or other meat products are contaminated with pathogenic microorganisms. These microorganisms are present both on the surfaces of the animals, as well as in the intestinal tracts immediately after slaughter. To insure product safety, recent federal regulations require microbiological testing rather than visual inspection. These regulations require that carcasses be tested for Salmonella.

Chlorine dioxide has been used very successfully in food, meat, slaughter house as a processing aid that is added to process water maintaining good microbial quality thereby impacting on the quality maintenance and shelf life of the produce.

Control of water quality is the key factor for a successful culture of aquatic animals like fish, prawn and shrimp. An open water system with sufficient good water quality may ensure successful aquaculture. However, if proper quality or sufficient quantity of water is not available, purification of water by eliminating polluting substances including toxic metabolites and growth inhibiting substances which originate mainly form fish or shrimp excretion and excessive feed is necessary. Under this lower water quality conditions there are chances for occurrence of mortalities by diseases due to viral, bacterial, protozoa, fungal pathogens. High populations of aquatic animals can be kept healthy under successful semi-closed and closed systems by maintaining proper sanitization. The increased demand in water quality and quantity in shrimp and fish culture has resulted in a growing interest in using water sanitizers and disinfectants. Chlorine dioxide is highly effective in controlling waterborne pathogens. Chlorine dioxide is a broad spectrum micro biocide as effective as chlorine against viruses, bacteria & fungi.

Milk is also a very nutritious medium for microbial growth, and spoils very quickly if not handled properly after collection. In addition, many pathogenic bacteria can also grow in milk, for example, Listeria mono cytogenes, Salmonella spp, and Escherichia coli.

Chlorine dioxide is a safe and effective sanitizer for use in a variety of milk processing and packaging applications. Chlorine dioxide can be applied to water systems, processing equipment, and environmental surfaces to reduce or eliminate milk spoilage organisms. Disinfecting parts of dairy machines, cans and tankers.

Remove and prevent growth of Biofilm with EOXIDE LQ